So we arrived at the famed Raohe Night Market 饒河街夜市 in Northern Taipei, which is in close proximity to Taipei’s Rainbow Bridge across Keelung River (another topic altogether), and accomplished the feat of exploring the entire district in a night. But hang on, this post is all about food! The night market 饒河 (Raohe) is named precisely as the stretch of food, beverages and late-night shops run parallel to 基隆河 (Keelung River). Our native Taiwanese buddies had highly recommended this street for its reputation of being less touristy and cheaper than Shih-Lin or Linjiang Night Markets. 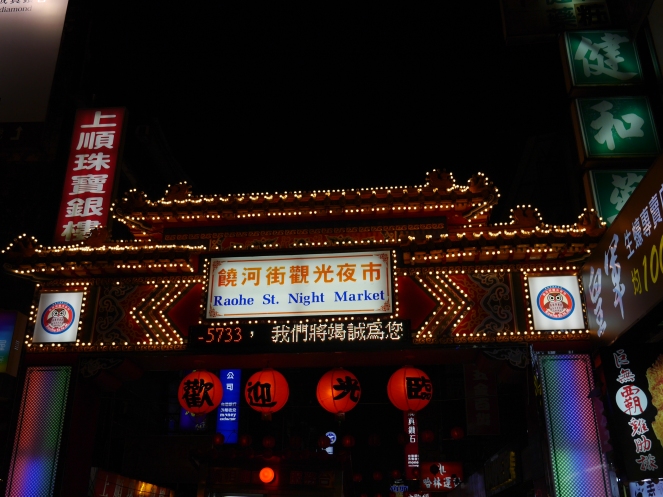 So we entered via the main street, having walked from the designated exit of Houshanpi Station, into this intermingling of food, clothes, gadgets, lingerie and everything-you-can-think-of shops.

We made these boys eat their first 臭豆腐 Stinky Tofu, Taipei’s famous smelly dish. They had mixed feelings about it.

We all loved this ice-cream & shaved peanut burrito/wrap 花生捲加冰淇淋! The scoops of ice cream came in vanilla, coconut and taro flavours, which tasted soooo good with peanut and the thin skinned crepe. The sprig of coriander added a unique twist. Overall, the dessert was refreshingly light – it felt just like having after-dinner mints, except with a lot more calories. I loved watching its preparation: the vendor first laid out the crepe, then shaved from a huge block of peanut candy. Three scoops of ice cream are set in a row before he shaved another layer of peanut candy, and topped it up with coriander. Then of course the combination is wrapped up, burrito style, and eaten like a Subway wrap. Voila! 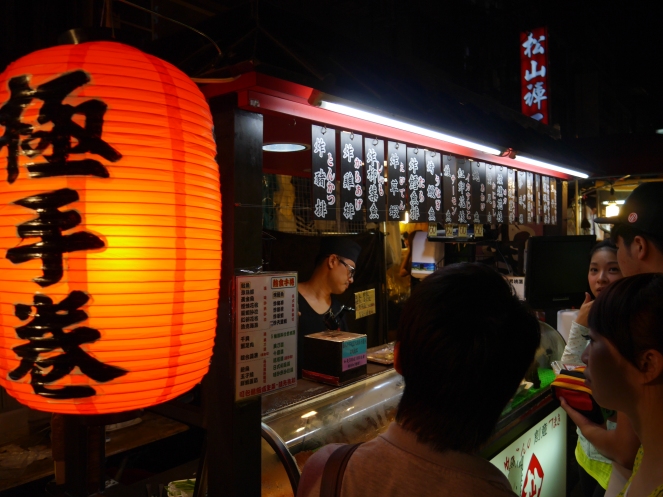 This one below is a personal favourite: Taro balls! I’d always thought they were cuttlefish balls but no, it’s made from taro, and fried. The Taiwanese do such amazing things with Taro, I love it.

Okay confession: I cannot remember what the dish below is. We ate too much that night to keep track of everything so if anybody could tell me what this is, I have cookies for you!!

And evidently, everything here was so yummy, that even on a full stomach, we couldn’t resist having to juggle all our food on our hands.

If you’ve got kids with you, they won’t be bored. Take them fishing and you get to bring the little rascals home with your big rascal. Hahha.

For the grownups, there are no lack of fancy-schmancy knick knacks and strange foods at Raohe night market. Here goes collection of my favourite shots: 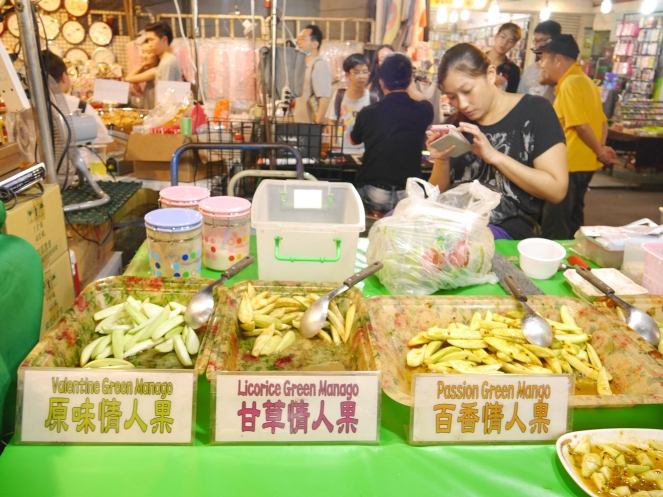 Having eaten our way through the night market, we crowned the ICECREAM&PEANUT ROLLS as the King of Raohe Night Market. If we had a sliver of space left in our bulging bellies we would have had seconds, but sadly we couldn’t roll ourselves back to the stall. Everybody needs to try it once at least, if not from Raohe then at other night markets. YOU WON’T REGRET IT. And life’s like that isn’t it? If you don’t eat it, you might not live long enough to eat it again #justsaying.