Whenever I’m done with a grueling day at work, a piece of light, fun chick-lit (or the likes of it) brings back the cheer in me. Lindsey Kelk’s humour is not at Sophie Kinsella’s, but rather, in a homelier manner her characters are likeable, relatable and slapstick funny. I couldn’t help liking Angela Clark. She is neither stupid nor ditzy. And the ballsy take-no-shit in her makes me want to follow the rest of her adventures to Paris and Las Vegas. FYI I’ve also ordered the rest of the I Heart series! 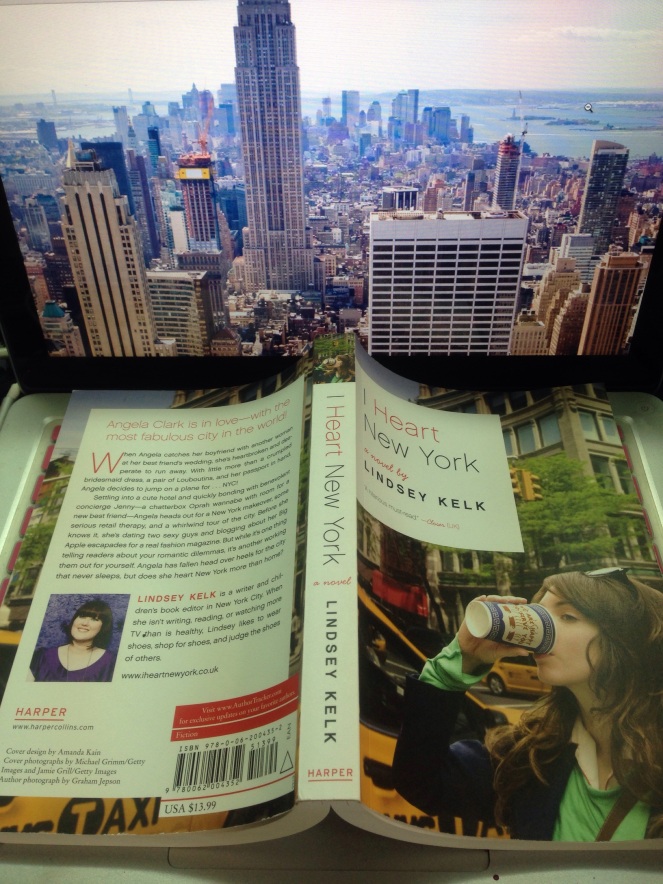 Angela Clark finds respite in New York after finding her fiance in the backseat semi-naked with another woman, at her best friend’s wedding. Worst thing is…EVERYONE knows about it but her. She traipses off to a new continent with nothing but 2 pairs of underwear and suitcase full of mismatched clothes. There’s nothing an overhaul can’t do, right?

This was an easy book to read. At the heart of the novel, a girl just needs time off to discover what she really wants in life. I would have totally done the same thing, to leave everything behind and start afresh in a new place. She makes a new best friend from the hotel concierge desk – Jenny – who takes her on a whirlwind ride in the new city, and as she takes on a bright revamped outlook on life, she draws people with her new vibrant personality, and men flock to her side. What a laugh, when she has to keep a blog detailing all the juicy secrets of her life and both her dates find out about it.

Getting to know the cast in I Heart is much like meeting a new set of friends whose lives appear totally typical but whom are in fact as screwed up as the rest of us. Reading I Heart New York was like cruising down the Big Apple for the first time: walking down Saks at Fifth Avenue, ogling at Macy’s and Bloomingdales, fighting vertigo on the Empire State Building. New York’s magic comes alive amidst frenzied dates to band gigs, late nights in Manhattan and detours to Boston. I must say, I’m definitely awaiting the arrival of the rest of the installments in the series!

Angela Clark is in love—with the most fabulous city in the world!

When Angela catches her boyfriend with another woman at her best friend’s wedding, she’s heartbroken and desperate to run away. With little more than a crumpled bridesmaid dress, a pair of Louboutins, and her passport in hand, Angela decides to jump on a plane for . . . NYC!

Settling into a cute hotel and quickly bonding with benevolent concierge Jenny—a chatterbox Oprah wannabe with room for a new best friend—Angela heads out for a New York makeover, some serious retail therapy, and a whirlwind tour of the city. Before she knows it, she’s dating two sexy guys and blogging about her Big Apple escapades for a real fashion magazine. But while it’s one thing telling readers about your romantic dilemmas, it’s another working them out for yourself. Angela has fallen head over heels for the city that never sleeps, but does she heart New York more than home?

(Perfect for fans of Sophie Kinsella, get ready for the summer debut of the year…
When you’re running away from a broken heart, there’s only one place to go…
Adjusting tiaras at the foot of the aisle, Angela and her best friend prepare for the wedding of the year. But events don’t go as planned. And when a girl is in possession of a crumpled bridesmaid dress – and can’t go home – New York (for the very first time) seems like an excellent idea.
Angela’s new friend Jenny Lopez gives Angela a whirlwind tour of the city that never sleeps, and a makeover. Who hasn’t dreamed of starting afresh with a sassy New York wardrobe, a new haircut and a trip to the make-up counter?
Before she knows it, the new Angela is getting over her broken heart by having dinner with two different boys. And, best of all, she gets to write about it in her fabulous new blog. But it’s one thing telling readers all about your romantic dilemmas. It’s another trying to figure them out for yourself!
Warm, funny and unputdownable, I Heart New York is an unforgettable debut)