In life sometimes it pays to be a little wild and adventurous. On check-out day, we took an early tram to Fishermen’s Wharf @ Pier 39, rented a pair of bikes and helmets, then peddled for a good half-day from San Francisco to Sausalito via the Golden Gate!

This is where Part 1 begins, from the pier to the foot of the famed San Francisco bridge.

Step 1: Begin with the end in mind. So we took photos with our final destination!

This is also where the negative self-doubts kick in…can we reach Sausalito and still make it back by evening to catch the flight to Hong Kong?

Okay who am I kidding. I was too excited for any of those worries. Golden Gate here we come! 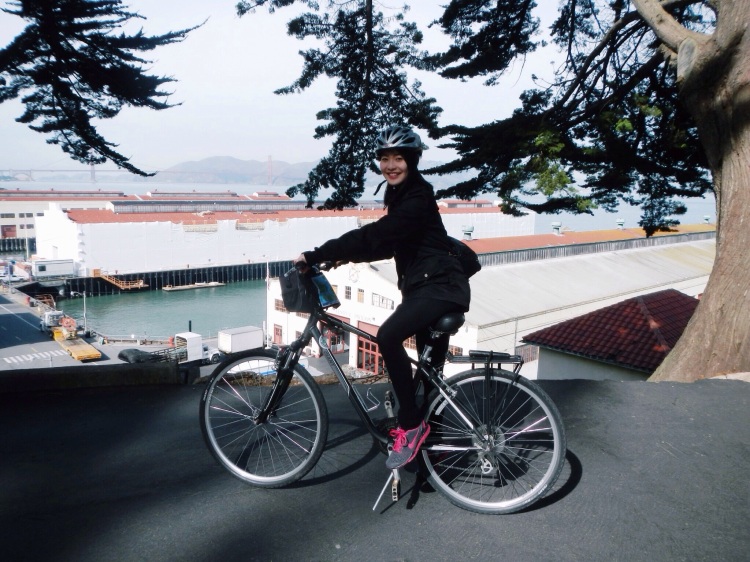 The terrain from Pier 39 was straightforward and easy for bikers, even for amateurs who haven’t touched a bike for more than a year (me). Right after the photo above was taken, we met with our first terrible uphill climb (there are only two along this bike trail). I can still feel the strain of the burn in my calves and thighs!

We took a couple of scenic detours (including a long stop at the Palace of Fine Arts) and a hell lot of photographs along the way, which I will eventually come around writing about, and progressively we also took shots with the looming Golden Gate as we inched closer and closer… 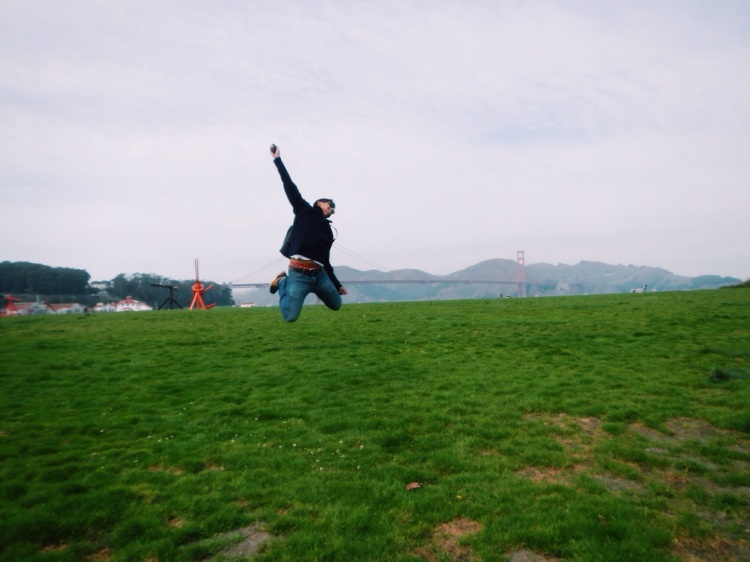 … and before you know it, you reach this jetty! Beautiful place to put your feet up and watch the seagulls circle overhead whilst waves hit the shores and you get to sip a latte from the cafe by the bay in full view of the San Francisco bridge. We took a short break and grabbed a hot drink. Although sunny, the biting wind sometimes numbed our faces; as I recall it was 3-5 degrees Celcius.

A semi-victory shot: we’re getting close! If only we could pull the bridge to us. 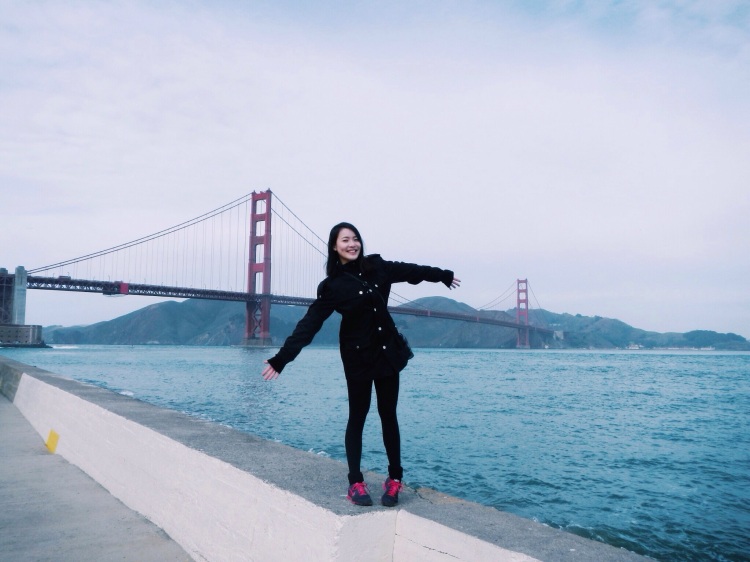 Still on the jetty, and guess whose familiar face we saw!?… 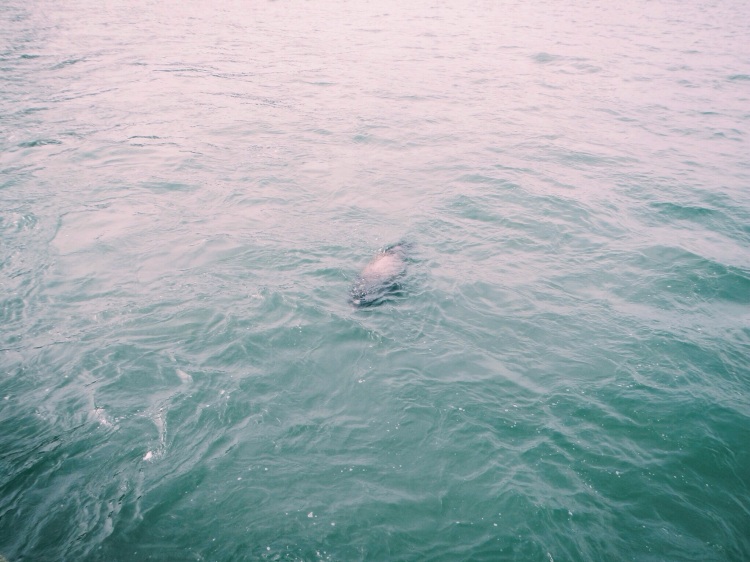 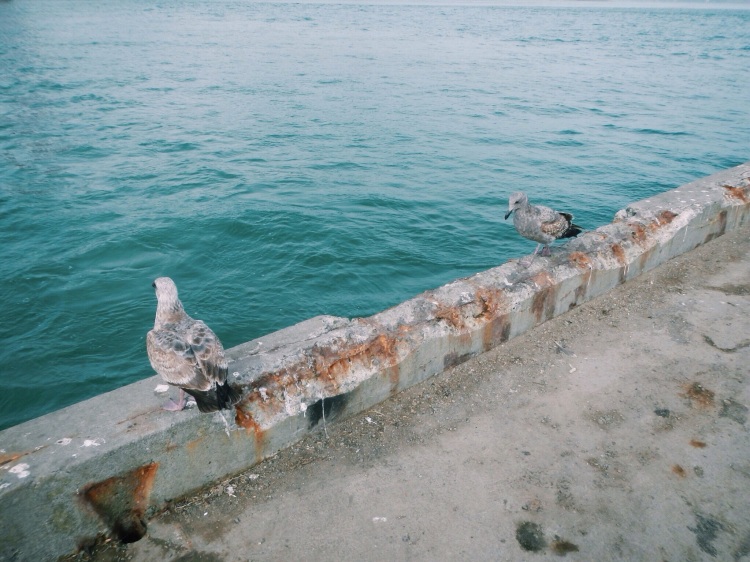 Yep… none other than the urp-urp-urping sealions! This one’s way more active than the lazybums tanning their asses at Pier 39’s Sealion Center. I swear he has a slimmer butt.

Interesting find: there are so many of these ship anchors along the shores leading to the Golden Gate. In the early days, warships, cargo fleets and passenger boats were tied and docked at these parking area.

And according to these people, fishing is lucrative along the bay. Perhaps they sell their catch to the restaurants at the wharf? I doubt any of them fish for personal consumption. 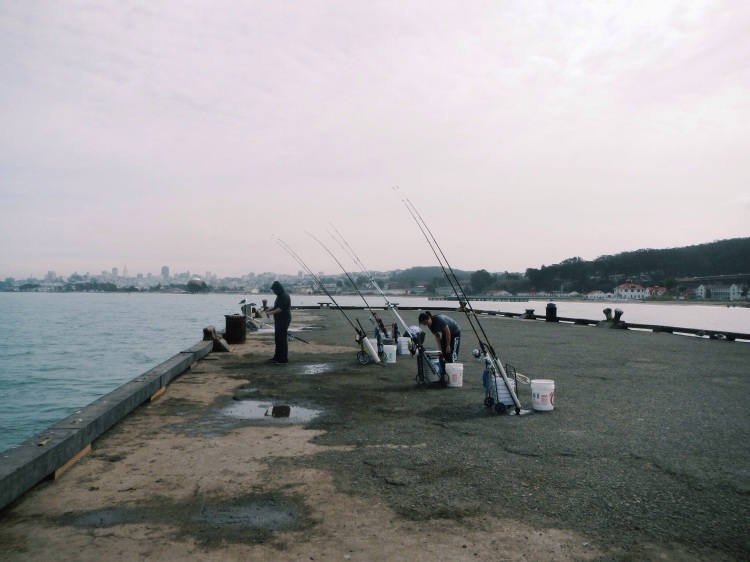 I SEE YOU NOW.

You ain’t far away no more!

One last detour: we wanted to enter Fort Point at the foot of the bridge, but all visitors are banned from its premises. Built to protect the San Francisco Bay, the United States Army completed the fort just before the American Civil War, as defence against hostile warships.

Oh well. At this point, we met the second uphill climb. I gave up and pushed my bike instead. What a loser, I know. Everything was good again when we reached the top, and look what we saw!

Hi there, so much closer now! 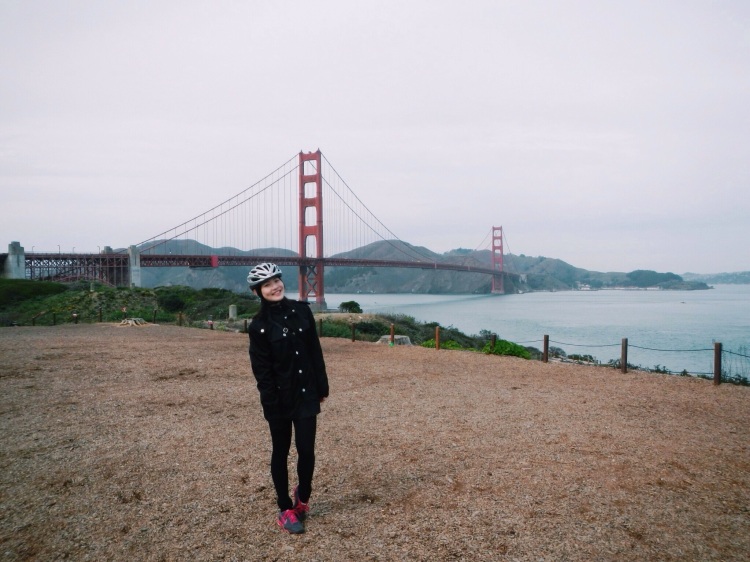 Before you hit the actual bridge path, an exhibit shows you the entire history of who, how and why the iconic structure came about. This fascinating board shows you the timeline of San Francisco bay: you just need to walk from left to right, and TA-DA – watch the Bridge appear!! 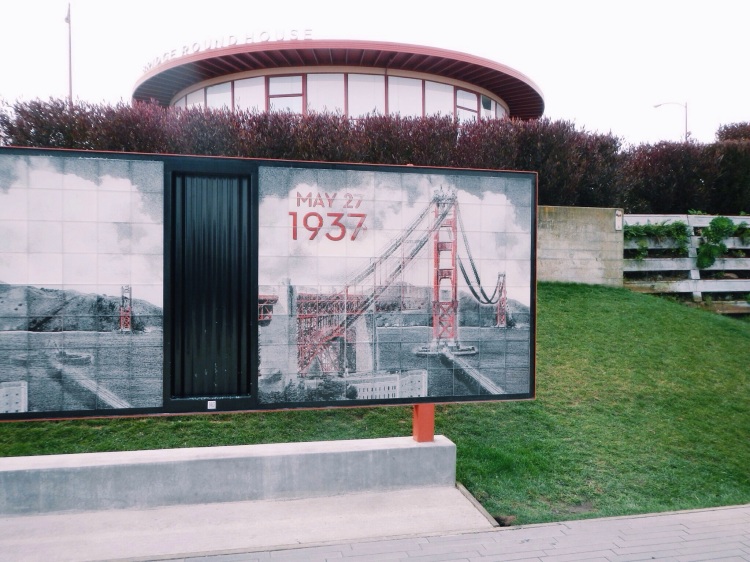 If you’re wondering whose smart idea it was to build this bridge, in 1872, a self-proclaimed Emperor Norton (highly eccentric citizen of San Francisco) decreed that a suspension bridge was to be constructed connecting Oakland to San Francisco. On July 9, 1933 – construction began on the longest bridge in the world at that time. It took three years and five months to complete the Bay Bridge. The final bridge cost was approximately $77 million, $6 million under the estimated cost.

Time for a little fun hands-on! You get to experiment why the bridge is of this length and height – everything was engineered and calculated to maximise efficiency of construction, stability and the ease of raising the columns to its desired positions. 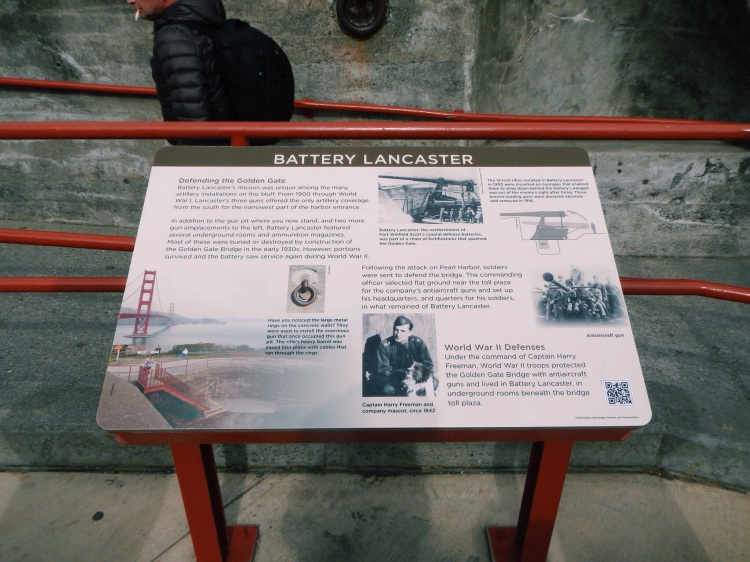 The Bay Bridge opened to traffic on November 12, 1936 at 12:30 p.m. A chain cutting ceremony took place where former San Francisco Mayor Angelo Rossi, former President Herbert Hoover and Chief Engineer C. H. Purcell looked on while former California Governor Frank Merriam opened the Bay Bridge. When the ceremonies were completed, President Roosevelt telephoned workers on two sides of the bridge to flash a green light to signal the bridge was officially open. Everything you wish to know can be found on the information boards. 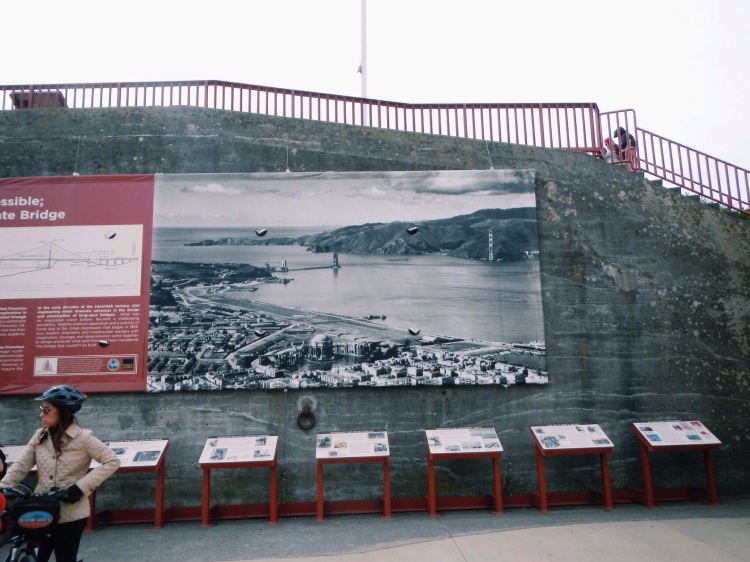 WE MADE IT!! I’ve always pictured the Golden Gate enshrouded in fog , and as it was a clear day, nothing was hidden 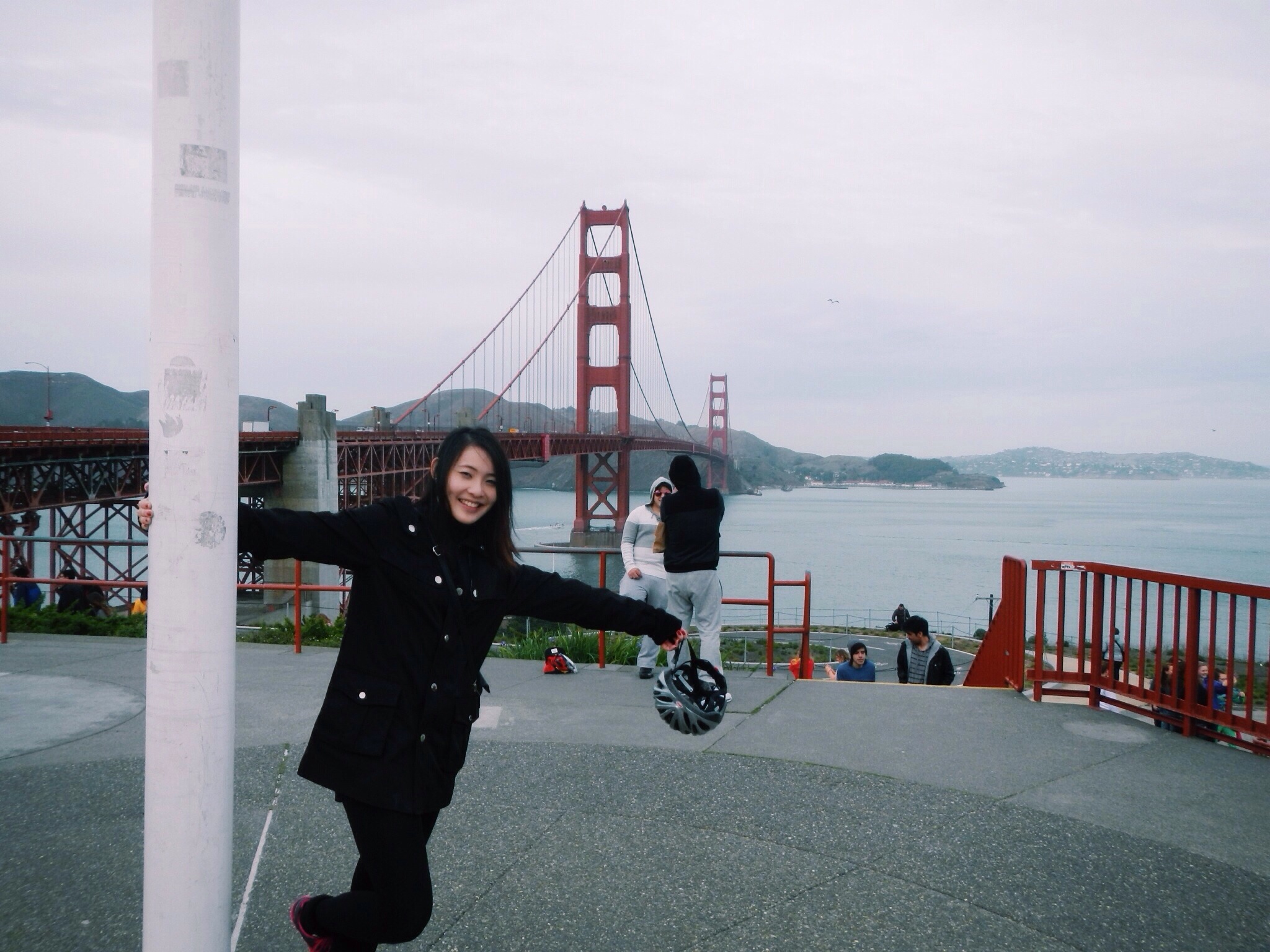 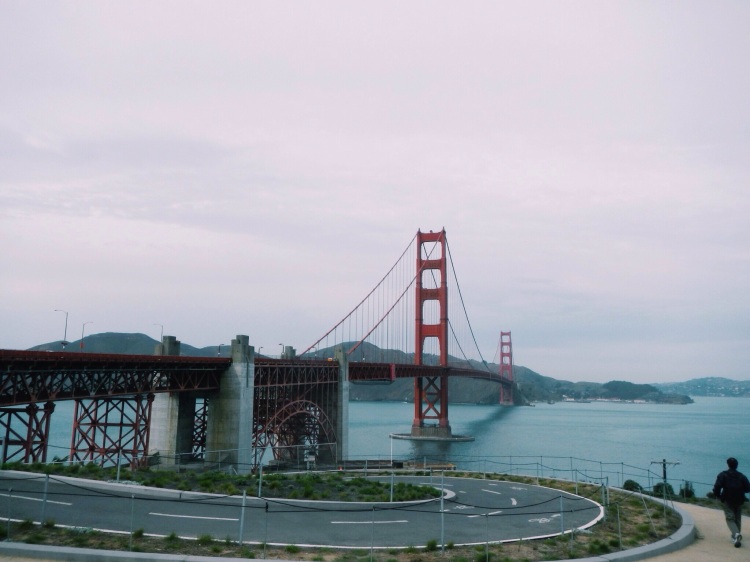 Two hours and we made it from Pier 39 to the beginning of the bridge! Honestly, it wasn’t tiring because I had great company and an awesome view of the sea. It was a good 2 hours and a few hundred calories well-burnt.

I’ll let Part (II) show you the next part of our biking journey…across the Golden Gate!!!

P.S. A full day rental of the bike costs around USD30, inclusive of helmets, without a safety insurance which you have to pay an extra 4 dollars for. There’re many bike rental places along Pier 39: Blazing Saddles, Bay City Bike Trails etc.

4 thoughts on “Biking the Golden Gate Bridge | Part (I)”